Over 50 Fein years of Oscillating – Part 1

The year 2017 marked the 50th anniversary of oscillating multi tools (OMT’s) since FEIN developed the plaster cast saw in 1967. The tools have come a long way since then and have become a must have machine for the majority of tradespeople to put in their tool bag. Here Dan Wood from FEIN – the inventors of the tool, and enthusiast Jon Sanders share where it all began and what it is about the tools that make them such an indispensable asset for so many tradespeople.

The first multi-tool machine began its life as a plaster cast saw, with an angular oscillating saw blade. It was used in the medical profession for the cutting of plaster casts, especially in orthopedics, the crescent pattern of the blade allowing it to cut through the cast whilst not damaging the patient’s skin. The mechanism of the oscillation combined with the powerful gearbox made the machine unique in its time. It took 17 years before FEIN had developed the technology into a commercial industrial tool.

So it was that in 1984 that the first commercial oscillating power tool came into being, providing the automotive industry with a tool capable of cutting and removing windscreens. It could be operated by one individual, with the pane of glass remaining intact despite the high speed of the machine’s cutting mechanism. Three years later another oscillating machine entered the construction industry capable of delivering an oscillating movement with up to 20,000 oscillations per minute. The machine’s main function was that of a delta sander, enabling the end user to sand but with the added benefit of cutting wood using a small selection of sanding pads and blades. In 1995 it was updated and re-launched with a full range of blades and accessories. To this day the multi-tool machines remain the flagship of the FEIN product range, 22 years on.

It was in the last 10 years that multi-tool technology really became exciting, with a whole host of improvements, breakthroughs and innovations entering the marketplace. In 2007, the multi-tool machine’s new motor made it far more powerful and able to deliver against heavy-loads, whilst the Quick-In system allowed for the development of quick accessory changes. 2011 saw the launch of the cordless machine with the battery technology enabling the machine to deliver the same power as a corded machine, another industry first. Then in 2014, tradesman learned of new anti-vibration technology, allowing some end users to be able to use the machine all day, as and when required. 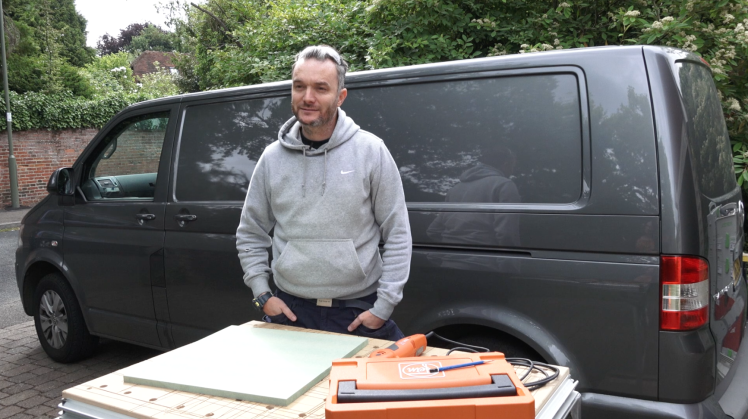 Jon Sanders is an accomplished carpenter and fitter with over two decades of experience in delivering various projects. Jon began his career in the 90’s, first model-making as an apprentice, then moving his skills to a film studio building company, with work ranging from building scenic flats to more complicated carpentry work on iconic film and TV sets such as The Bill, Batman, James Bond and Star Wars, but to name but a few. It was on one such set in 1999 that Jon was loaned a FEIN OMT by a workmate, to help him deliver a hard to reach cut into some set piece material. Jon became an OMT enthusiast immediately.

As Jon says “I am a bit old fashioned due to my training and I often turn my hand to handsaws, jigsaws and other traditional tools as point of reference, however, the multi-tool tool really helps out with a number of applications. Firstly, when I am fitting units prior to assembly or cutting frames, the blade delivers precise cuts and also helps with plunge cutting, particularly when fitting wooden flooring or decking. I often use triangular pads to assist me in removing paint residue or mould when re-purposing wood. In times when I cannot deliver a cut in hard to reach places, the length of the tools in general allow me to cut waste material at a distance.”

“I loaned my FEIN multi-tool to a friend who fits bathrooms, and he also found the tool exceptionally useful for removing grout and preparing units as well. All in all, the multi-tool is an incredible aide in my workplace and to many of my mates in the trade they use it in place of existing tools. We all debate price, quality and which brand we prefer over a pint, but many of us now agree that the multi-tool is invaluable and has changed the way we will work for a very long time.”

FEIN was able to promote these technologies and the tools to many markets exclusively until the patent for oscillating tool technology ended in 2007. Now most major brands collectively promote and sell oscillating machines, accessories, tool cases, batteries and charger kits. The multi-tool invented and developed by FEIN has a proud heritage and now after 50 years is the go-to machine for many tradesmen.

Find out more about our multi-tools :